JConcept: Bullet Vconcept The Hull made in south of France (english version)

Passionate about motorcycles forever, David tries in 1989 the Kawasaki 440 Superstock of Denis ARTIGUES, the racing truck planner of the Crossman Yves DEMARIA. It’s love at first sight and he buys immediately a 650 SX at Didier NAVARRO. The unreliable viability of the time makes David put his hands in the sludge as soon as he makes his firsts outing.

In 1990 Yamaha release the 650 Superjet but David start to alter the hulls to make them more comfortable and adapted to his piloting style which is more Free Ride style.

With his forever friend Pascal DESTEMBERT (Boss of the Team Speed Car in Ales (30, France)), they still ride and their passion for this new nautic gear with an engine is only growing.

The 90’s: Jet-ski is rising in Nimes (30, France) Region and David finds the local pilots (Karine PATUREL; Didier NAVARRO) on the nautic base of Meynes (30, France). David is training with the future’s worldwide celebrities of the discipline...

In 1994 the first hull made in Provence is born (a superjet hull fully built with big changes Jerome BOYADJIAN will pilot with this hull in Freeride and another version in Race).

With the help of his brother and Pascal, the first Jet Concept hull was born (90 kg all assembled). Didier NAVARRO interested by the project will assemble his mechanics of his race jet and even with conclusive tryouts he wasn’t able to use this Hull with his race engine because of regulations who didn’t authorize the superior bridge to be modified.

David then goes under the Antilles’ sun as a mechanic on jet-ski base in Saint-Martin / Saint Barthelemy’s islands. He meets Jean Luc DOCQUIER (Jet renter on Saint Martin island) and join the Jet Sensation Caribs Team of Jean Luc. Together in 1996 they join for the first round of the world championship UIM in ACAPULCO, Mexico on a blaster 2 with 1100cm3 engine, Jean luc wins the 2 firsts rounds in his category.

Back in France where he joins the official Seadoo Team with Didier NAVARRO and Franky ZAPATA.

David continues to make custom made hull mainly for FreeRide.

Coming out of David’s workshop also a few atypical jet-ski that many know as the Y2 (« X2 » version of the Superjet).

Those last years the market of FreeRide Hull being overloaded, David challenged himself to release a Jet Kart with the basis of a Jet-Ski, by taking the idea of the Jet Sprint in New Zealand with their monstruous engine that can go up to 1000hp.

A first prototype makes its tryouts in 2014 in Haut Broussan domain in Bellegarde (30, France). A boat licensed version on the basis of 300RXP was produced in a few copies.

Now that the presentations are done, we’re going to go straight to the point, the why and the what of the Vconcept which was at the beginning an after-market hull made by an American company « Bullett » (Lake Havasu, Arizona, USA). Indeed, for about 10 years after markets hulls are more and more seen in competition. Rusty GEWECKE BULLETT’s owner has already multiple world champion titles in UIM and IJSBA championships with his hulls thanks to pilots like the American Chris MACLUGAGE (4 world champion titles with his Bullett) or the French Jeremy PORET (9 world champion titles). Always in development and in line with technical rules those hulls evolve often and some pilots don’t have the means to change them every year. One solution exists in the south of France where David plays with the grinder and fiber to make the older hulls longer.

We’ve met David in his « den » in Arles to know a little more about this famous Vconcept.

- David why did you alter the Bullett hull?
The V2 or V2.5 weren’t competitive when v3 came out, in the end of the 2018 season Philippe ACHARD (ed: pilot of veteran category in blue cost, 13, France) asks me if it’s possible to make the hull longer. Christophe CALMELS (ed: pilot in JX1 and Veteran categories from Salon de Provence, 13, France) was also interested and take part in the discussion. A few months later Vconcept model was born. An 18 cm extension and in accordance with Jet Cross regulations. The jet’s behavior was radically improved as the efficiency.

- Other pilots came to ask you to alter their hulls I suppose?
Yes, Rémy DEMICHELIS (Ed: Pilot in JX2 Category from Saint-Andiol, 13, France) try this new version, was conquered and asked me to alter his. The last pilot in date to have ordered a Vconcept is Mickaël Traclet (ed : Pilot in JX2 category from the French riviera).

- How do I do if today I want my hull to be altered? How much does it cost?You contact me (ed: coordinates below this interview). The price is the same for everyone, no differences, to not have any problems with the pilots. You have to add a budget for a coachbuilder to do finishes and the paint. Three hulls were entrusted to Thomas FISHER. The altering of the hull takes around two weeks on a bare jet, and more time at the coachbuilder

Team Bullett Vconcept Made in Provence 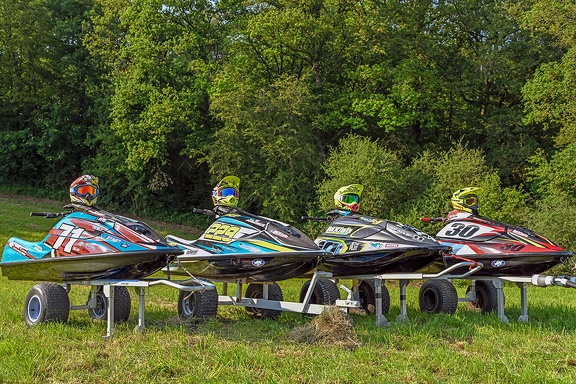 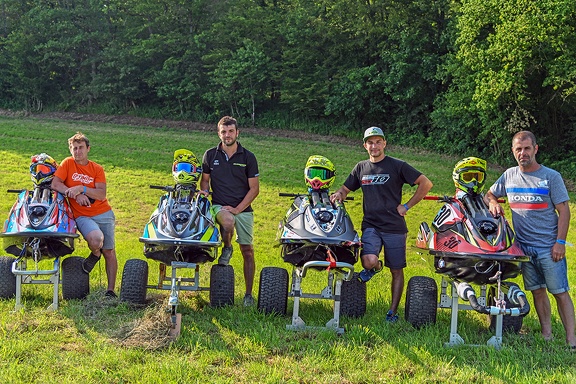 Thought: An intuition that was worth it!!!!!!!! And effective in stability. 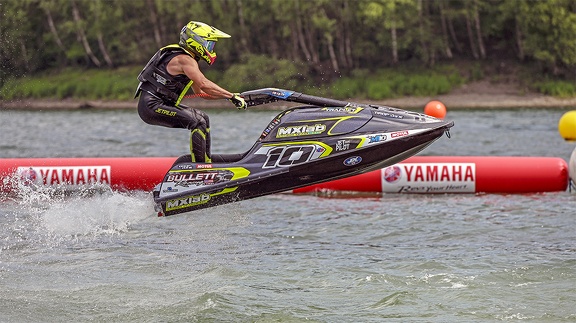 Thought: I made the decision to alter my Jet Ski because didn’t felt any fun anymore, it was really hard for me to sail in race and I didn’t have the means to buy myself a new hull in the middle of the season. I had the chance to try this new Jet and then I had fun again to sail on a jet more stable and efficient.
Without an hesitation I had alter my for a reasonable price and thanks to David JetConcept for this work.

DEMICHELIS
28 years old
Category: JX2
Unaltered version: V2
Engine: Kawasaki 2 strokes, 11000 cm3, 3 cylinders
Preparator: Paratec
Kind of preparation: Standard (105 km/h)
Objectives: Of course take as much fun as I can but also be on the highest step of the podium, because we are competitors.

Thought:  I chose to alter my hull Bullett V2 to give her a second life thanks to this transformation she much more efficient I have more stability, driving comfort and therefore I am less tired and now I can compete with Bullett V3.

Thought: The alteration made the jet easier and suppressed some defaults of the original, the jet is more precise.

Thank's you so much Mélanie CALMELS for the translate